What Tim did after Steve 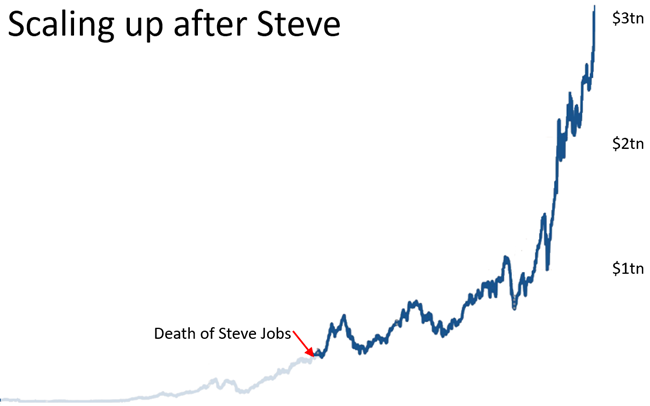 There were a lot of naysayers about the future of Apple when Steve Jobs died in October 2011. Few were confident about the Company he’d created and its future under Tim Cook, who’d just been promoted up from Chief Operating Officer to CEO. Even fewer had any idea about the rocket ship that the business has become since then. The commentary has changed, now that Apple’s market cap has hit the $3tn mark.

The FT notes that the value of Apple has grown by more than $700m a day since Tim Cook took over as CEO that August, but this belies the recent vertiginous slope. Can it continue? Who knows, but for all of us who are working to build businesses, it is worth looking inside to see what might be behind this astonishing achievement in scaling.

The sheer scale of Apple’s operations is astounding 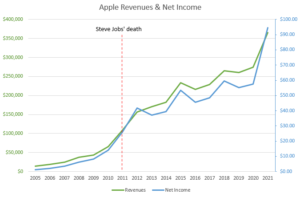 Apple has thousands of SKUs to keep track of. Last year, Apple listed 18 current hardware platforms, 73 accessories and peripherals, 7 operating systems, and 28 current software and services in their catalogue. Think about it: the MacbookAir is just one item on this list and so is the AppStore. The scale, complexity and range of their product set is astounding.

All this activity powers their growth of sales revenues and profits, and this is what has driven the rise in stock price. However, it’s a never ending treadmill – more demands, more activity, and all that activity has to be managed and the quality maintained if it is to be sustainable. Apple’s performance is exceptional for the continued sales growth and because the profitability of those sales has also continued without a loss of quality, as so often happens.

Both revenues and profit have seen an increase of almost four times since the death of Steve Jobs, and they were already huge then. That continued upward march of profitable sales growth has been achieved despite the huge increase in operational scale and complexity that it has required. How has this been possible?  A four fold scale-up would be good in any business. Can we see inside to get a glimpse of what’s been going on?

“Tim is an efficiency expert, an operational guru” 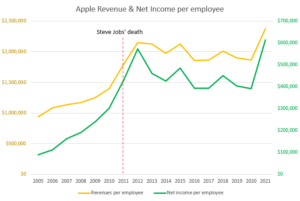 Ray Wang, chair of Silicon Valley-based Constellation Research, says that “Steve was a visionary firebrand, and Tim is an efficiency expert, an operational guru. You need a person that comes up with the great ideas that get people excited . . . and you need the person who puts them into the market at scale”.

One look at the numbers points to the change of strategy brought about by Tim Cook when he took over as CEO just before Job’s death in 2011. One year later, revenues and profit per employee broke from their wild upward trajectory and have essentially flat-lined since, arguably declining slightly, indicating that the Cook had decided that the way things had been done needed to change, and change it did.

As Marshall Goldsmith wrote: “What got you here won’t get you there”. 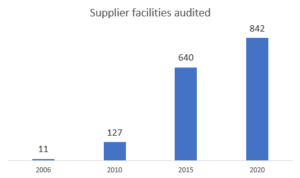 Cook’s strategy has been to build a supply chain outside Apple with suppliers shouldering the lower value, volume related effort, while Apple’s people concentrate on the higher value design, marketing and sales.

While it’s difficult to unearth precise facts and metrics about the extent of Apple’s supply chain, its growth and reach is fairly easy to deduce. Apple published its first report on suppliers in 2007, saying that it had audited eleven factories and production facilities. Audited facilities have grown dramatically from this early base, adding over 800 supplier facilities to support the shift to outsourcing all the ballooning effort required to support rapid growth. By 2020 there were 842 being audited. 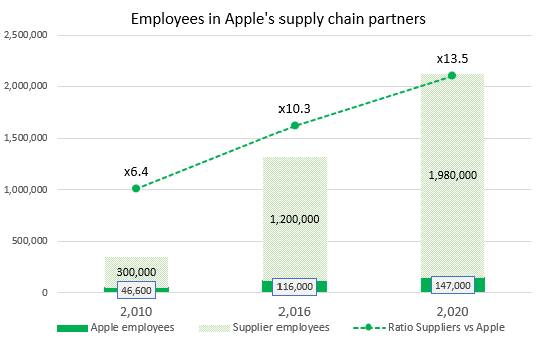 Much more striking, though, is the number of employees in Apple’s supply partners. While Apple has increased its employee rosta roughly in line with sales growth, the number of people in their supply chain has mushroomed much faster, from over six times Apple’s staffers in 2010, to x13.5 in 2020. Almost two million employees now work for their supplers, dwarfing the 150,000 people working in Apple, itself. 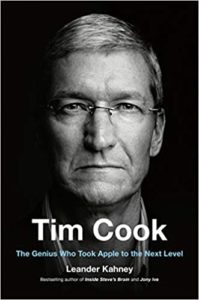 Leander Kahney, who has written a new book about Apple’s CEO, writes that: “Historically, most manufacturers owned their factories and equipment and manufactured their products in-house. Apple is mixing it up: Apple owns the manufacturing equipment, but the supplier owns the factory and the workforce.”

Classic products are delivering demand. Consumers who have hung on to handsets for years because they were uninspired by previous releases, are now starting to switch as 5G becomes a reality. Despite the chip shortage, iPhone sales have grown by 47%..

Apple took 42 years to become a trillion-dollar company, two years to double it to $2tn, reaching that in August 2020, and just over 16 months to get to $3tn market capitalisation. This breakneck growth was achieved with a huge range of complex products, and without compromising the quality of production.  This didn’t happen by accident.

Managing factories and the production workforce was never where Apple’s skills lay or what it wanted to be known for. Apple has long published annual lists of its top suppliers, and the latest list for 2021 is illuminating, as always. The list only details the top 200 or so, who handle some 98% of Apple’s direct spending on materials, manufacturing, and assembly, worldwide.  The rosta of the top 197 specialist suppliers lists 454 facilities around the world, and it’s this flexible and scalable supply chain that now underpins the growth and the ability to adjust to circumstances and demand.

Tim Cook has created and honed a network of specialist partners to handle the volume and complexities of everyday life in the supply chain, and this is able to respond quickly as demand and circumstances change. These partners are dealing with all the lower margin routine workloads at scale, while he and his team concentrate on the high value creativity and flair behind products and marketing. The strategy is Partners not Payroll.