Netflix shows us that Cloud is a jungle

Good entrepreneurs and great salespeople share a key characteristic: at heart they are control freaks. In some it may all be fairly benign, carefully moderated and directed to get good things to happen, but control is what drives them. Michael Porter’s Five Forces is a well established device that’s used by market strategists to analyse the tensions and actions among market players, and two of those forces that are constantly in in a tug of war with one another are: Power of Customers, and Power of Suppliers. Perhaps control freakery goes some way to explaining it. The entrepreneurs and sales people in suppliers are competing with the animal instincts of the decision makers that they’re selling to. 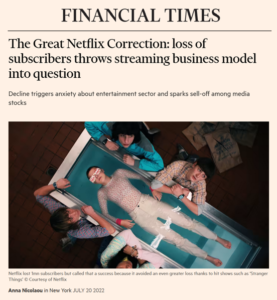 A recent headline in the Financial Times gave me pause for thought:
“The Great Netflix Correction: loss of subscribers throws business model into doubt”

My first thought was to ask myself whether Netflix is actually just a gigantic Ponzi scheme, where new victims are needed to pay for the benefits that were sold to existing customers. So far, the business model seems to have been to pay for content by selling equity to people who’re excited by rampant growth of subscribers. It rather looks as though the wheels are coming off that handcart now. Market cap is down from $300Bn in November to just $90Bn, partly because they shocked everyone by losing 1mn subscribers last quarter, albeit not the 2mn that had been forecast. Still, it’s hard to see how this year’s budget spend on contant of $17Bn is sustainable on total revenues of $29Bn. The writing looks to be on the wall with an initiative to reduce the multiple use of passwords, which the Company reckons is responsible for 100mn viewers who don’t pay. They’re also working on an advertising proposition with Microsoft, which is completely against the ethos they espoused to begin with.

Bank of America has cautioned that streaming has “…very quickly become a commoditised product”, and it is. When you think about it, once you’ve watched the particular movie you wanted to see, that streaming channel becomes much like any other. There might be a tv series to stretch out your allegiance, but that’s about it. This is why media companies fight so hard to get the rights to big franchises like Star Wars. Harry Potter and so on. Sport, now there’s a category with real stickiness and obsessive fans, which is why the rights are so hotly contested and expensive to acquire. At the end of the day, though, streaming providers and media suppliers have only weak and transient power, and it’s their customers who can vote easily with their eyeballs and go elsewhere, and they do, as Netflix is finding out. I started to compare this with Cloud, particularly Public Cloud.

Cloud services are all the same

If you want to see Stranger Things then you have to go to Netflix, or Prime for Terminal List. To that extent media streamers have some power because they each have shows the others don’t. Compared with media content, however, Cloud is truly a commodity: something you can get from diverse suppliers and differentiated only by price.

Cloud is compute, storage and networking on demand, out there somewhere. Except for some specific niches, storing data, doing computing with it, and moving the results can be done with anyone’s cloud infrastructure. So you would expect Cloud customers to be in control – they could be but many are not.

In media, customers have the power and suppliers are scrambling to hang on to them with mixed success. In contrast, the major Cloud suppliers are fighting one another for market share, and have developed one armoury of features to draw people in, and another whole arsenal of devices that make it hard for customers to leave unless great care and thought went into the deployment from the outset. Coupled with these,

Concentration risks: Cloud is surprisingly concentrated with four providers accounting for an astonishing 70% of global revenes: AWS, Azure, Alibaba and Google. In fact it’s even worse than this suggests because AWS and Azure are responsible for over 50% of that 70%, so almost everyone else is a bit player. This concentration of risk is growing and raising the concerns of many. The Bank for International Settlements published a paper discussing the risks to the stability of financial systems. The EU is on the case and looking at the monopolistic power exerted by this oligopoly. My blog looks at this from an SME perspective.

Price traps: The problems for customers of Cloud are legion, from Microsoft’s pricing up its software licences when used on anything but Azure, to AWS charging you if you want to ship your data elsewhere, and these are simply the most obvious issues. We hear that Google’s billing doesn’t align with usage, making it hard to track real costs. “Free credits” to make it attractive to get committed. Modelling the impact of scale-up can be fiendishly difficult introducing extra risks into business forecasting.

Cyber: More insideous are the side effects of how attractive to hackers these huge pools of infrastructure and customers are. The escalating cost of Bitcoin mining and the falling value of the results have made it hugely atrractive to hack AWS and get bursts of raw power at someone else’s expense. The size of the hacking target presented by the major vendors, and the scale of potential benefits of exploitation, bring other dangers that are sometimes overlooked and not factored in when choosing a provider, as was revealed by the SolarWinds hack. Real costs for customers have run into tens and hundreds of thousands of Dollars and AWS, for one, has proven to be hard hearted in cases of this that we’ve heard about, using every leverage to keep the customer from moving. Other hacks in Cloud have found ways to breach the barriers between different customers’ infrastructure and hop from one to another – the so called cross-tenant risk.

Click to subscribe, call to cancel: The major public cloud brands offer higher level technology services that are not intrinsic to the cloud infrastructure, but add to applications, help in different ways, and often add functions to help deploy a service into the Cloud more quickly or easily. That sounds all well and good, except that each vendor has their own mix of services that are proprietary and owned by that single vendor and will rarely work anywhere else. They sometimes do similar things to services from other vendors but they work in completely different ways, making it very costly for the customer to move to another vendor if that becomes the wise thing to do. The purpose of the services, it seems, is to make it easy on the way in, and not so easy on the way out: “click here to subscribe, call to cancel”.

The allure of single brand convenience: We’ve all seen the gambit in sectors as diverse as discount warehouses, eCommerce players, banks, insurers and others: some attractive offers and prices, but you end up spending more than you expected. It seems so much easier just to get all you need from one vendor. There may be advantages – single invoice, one neck to wring and so on – but one Cloud vendor won’t have the best prices for everything and may price some low deliberately to draw you in. Indeed sourcing everything from one provider increases vulnerabilities to price movements, functional changes and all sorts of other risks with no easy alternative if you need to exit. 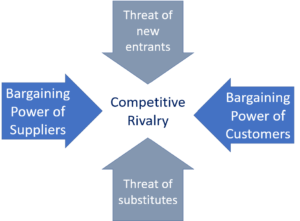 Using Cloud – and we’re talking Public Cloud in particular – has undeniable advantages but the risks and uncertainties are there, too. Foremost is that in a fast moving world, business decision makers need viable choices and straightforward flexibility, and these things can prove ellusive in the Cloud. A careful path must be devised to navigate the jungle of risks and uncertainties that so easily create strategic threats from what should be a tactically valuable resource.

The following key themes should underpin a business strategy for Cloud:

The future is uncertain: we know this already, so it doesn’t seem to be anything new, but the world is particularly uncertain right now. These are “externalities” in the jargon. Wars, pandemics, climate change, geopolitics, inflation and taxation are just a few of the big influences that business leaders must navigate. We must assume the unexpected will happen and require us to react, so the status quo will not last and we will need flexibility aplenty.

Preserve choices: without this, business decision makers are doomed to be passengers who are limited in the actions they can take when confronted with change to respond to and issues to resolve. Decisions about strategy should be examined for their downsides as well as the advantages that they bring. Obvious downsides are increased costs and effort, but restrictions on flexibility and choice must be factored in as well. So up for debate and analysis should be any service that falls outside simple, vanilla compute, data storage and networking, particularly services that cannot be had from other vendors.

Question any One Brand approach: this is rarely done explicitly as a part of planning, and risk concentration and loss of choice and bargaining power are the result. When you dig into it, choice of Cloud brand is often driven by familiarity and therefore comfort levels, skills in the team and those that aren’t, and reputation, rather than suitability and business factors like price, support and how these costs may change with scaling. Considerations like these should be included in the assessment of the main components of Cloud, too. For example, pools of data at rest are sometimes best stored in one place, capacity to process bursts of activity in another.

Evaluate the cost of moving: pressures for change are inevitable, so it is wise to understand the costs of moving should this become necessary later on. We’ve seen people struggle with a provider and configuration but be unable to change because the cost of switching provider was so high – they couldn’t stay and they couldn’t go elsewhere either. Yes, you would expect it to be easy to sign up for a service, but make sure you understand what would be involved if you needed to reverse that decision.

The technology must deliver for the business: at the end of the day, the Cloud solution must be able to deliver reliable, flexible and economic service for the business and its customers, and the technology issues must become secondary. So service and support levels, economics, flexibility, resilience and reliability become the key factors by which Cloud infrastructure is judged, and so they must be uppermost in the choice of solution and vendor at the outset.

The power of choice is there for Cloud customers to begin with, but many factors have the potential to undermine that freedom once choices have been made. In the high competitive world of Public Cloud, and particularly among the main brands, there are many reasons for vendors to devise all sorts of mechanisms to keep customers from moving away.  It’s a jungle out there, so it’s crucially important for the business to understand its needs in the future, the risks and uncertainties that come attached to the solution proposed, and to arrive at a wise choice of infrastructure, the providers and the path ahead, eyes open.