In the middle of all the upheaval and turbulence being caused by Coronovirus, and with anger and posturing all around, business decision-makers must navigate and that means they have take a view and make decisions. Tony Yardley-Jones and I worked on the bird ‘flu epidemic in ’09, giving some business leaders advice on the background and about the implications they might consider. As Coronovirus emerged in December and January, Tony and I pulled our old files down from the metaphorical shelf and set to work.

The first thing a decision-maker needs is information that’s as near factual as can be. Self-briefing is the underpinning of good decision-making. What astonished us was the poor quality of the information being put out, so we started to develop our own analysis. We used, and still use, only data published by WHO and ECDC because this is the most rigorously validated and harmonised data set generally available. From that, we concentrate on the data about fatalities because these data are much less prone to shifting definitions, volumes of testing, and so on.

Business leaders must frame their decision making around factors that are different from those of individuals. Fatalities are not as important for business decision making as sickness and the responses of policy makers and people. This boils down to two key themes and challenges that lie ahead:

These are the issues we seek to understand here, and provide some dispassionate and factually informed thinking to provide useful context for those that have to make decisions about the future.

Our analysis does look at the UK situation, but the structure of the implications is much the same for any country, with varying metrics being significant.

For decision-makers in many countries, the challenges are not created by the virus but by the response to the virus, and the responses to the response.

Policy making is incredibly tough in this environment: medical factors are easy to assess and respond to on their own, as are the economics. What the public will go along with is far from easy to judge, especially with a large number of different people in dissimilar circumstances. Policy making has to balance all of these things in an unfolding, fast changing environment with external and uncontrollable factors. Consequentally, business has to operate within a shifting policy framework, and this is not something that’s likely to settle down for some time.

The wide variation between countries’ experience of the Pandemic is matched by wide and changing variations between the policy responses of each country. This, too, is unlikely to diminish in the months ahead.

The conclusions are inescapable. First and foremost, the impact of the pandemic is heavy and widespread – it is truly global.

A second inescapable conclusion comes from having seen the data develop around the world over time. The differences between countries has been astonishing in their scale and diversity. One look at the country profiles shows that you’re hard pressed to find any two with more than maginal similarity between their profiles of cases and fatalities. Who would have thought it possible?

Well, nations are a curious construct that has nothing to do with the virus or its characteristics. The size matters, so the early outbreak in New York City got lost in the scale and diversity of the USA, but San Marino, which currently leads the list of daily fatalities per million, is shown in stark relief, unsurprisingly with a population of 33,000 not 330,000.  Many countries are having a really tough time, and Chart 1 shows the list of big movers over the last thirty days, but the growing story is about Europe. Chart 22 shows where the growth in fatalities lies.

Can this winter be navigated so as to avoid the collapse of the health system?

The collapse of the health system would have far reaching implications for public and individual health of all kinds, not merely related to the Pandemic, and be hard to rectify and take considerable time, as would public confidence.

Seasonal ‘flu tends to peak between December and March, and there can be wide variations between the severity, sometimes being as much as ten times as large in some years compared with others.  It is not unusual for seasonal ‘flu to bring national health systems in Europe to the point of overload.

Statistics from the UK indicate that there are around 7,500 patients in hospital now, being treated for Covid-19, with around 1,000 new arrivals daily. The Kings Fund reported in March 2020 that there were around 4,100 adult intensive care beds in the UK.  In August, the LSE reported that the NHS had created 33,000 critical care beds in Nightingale hospitals in less than a month. These statistics indicate that Nightingale capacity must now be being utilised, and there is a great deal of headroom so far as beds are concerned.

The focus has moved from bed capacity to organisation and the availability of adequately trained staff. Under guidance from the Faculty of Intensive Care Medicine which applies at normal times, intensive care “requires a registered nurse/patient ratio of a minimum 1:1”. It’s easier to build an extra 33,000 bed capacity than to lay your hands on 33,000 trained staff and an organisation that deploys them effectively. These are the points of strain and constraint for business decision makers to listen out for in the months ahead.

Will organised dissent emerge over the winter that leads to social instability?

As we said in January, a key point will be reached when the uniforms in the street turn from blue to brown, and so it remains. As yet, in the UK as elsewhere, restrictions are only just beginning to tighten again, after a summer that led much of the population to behave as though the Pandemic was in the past, of no consequence, and for some not real.

Local government has entered the fray as a third protagonist in the ring along with central government and the opinion of individuals and the public at large. Posturing and gaming for advantage and principle are now factors that will determine where this goes, along with the shouty sections of the media, who often appear to have no agenda beyond mischief making.

With widely divergent opinions being held strongly across the population, and a diversity of circumstances for sections of the public by locality, economics, and vulnerability, there are no right solutions that exist. Policy makers can only balance wrongness for some people against rightness for others. Every decision made will be wrong for some, and gaming by mischief makers and people looking for political advantage will exagerate the wrongness loudly, with rightness having few advocates who speak out.

Decision makers should watch for signs of organised dissent and actions that change the colour of uniforms in the street. Organised dissent may become a feature of politics, too. You can already see signs of preparation on the sidelines all around. The peak stress points may be as much as four months ahead. 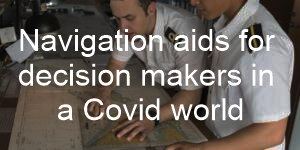 There is some evidence that as many as 10% of Covid patients end up with what’s becoming called Long Covid. The effects of post-viral syndromes can be long lasting, hard to pin down, hard for employers to distinguish from other aspects of motivation. We need to start thinking about this and the tough snags it can create in HR, on-going health, liabilities and other implications.