Navigation aids for decision makers in a Covid World

For a few months in the Spring of 2020 it was hard to see what any sort of future looked like. Business decision making was strictly about securing survival and, as they say in Formula One: “If you want to finish first, first you’ve got to finish”.  Often, the amount of time this survival effort took was proportional to the stage and scale of the firm, but in general, most had done what they needed to by mid-Summer. Investors too.

There was a brief time when some relaxed into thinking Covid-19 was in the past, but that was swept away by the wave of cases that began to build after vacations ended, schools and universities returned, and parents got back into their working lives. Now, in the Autumn of 2020, this is a global infection that appears to be largely out of control.

Looking at today’s charts, it’s clear that the grip of Covid-19 is widespread and growing deeper as each day passes. There’s no sign in Europe that any country has brought the infection under control, yet. The UK is some way behind the leaders: Switzerland has leapfrogged Poland in the rate at which cases are growing – both have cases growing around x17 in the last five weeks. The UK is in a distant ninth place growing at just x4.5. The Czech Republic is still far out front with 13.6 daily fatalities per million, which is exactly peak the UK reached in the Spring on 14 April, but they are still accelerating hard, while ours are only rising comparatively slowly.

How should policy makers respond? There is no cure until there’s a cure. The best we can do is to limit the greatest damage to what we can cope with, and buy time in doing so. No lockdown resolves the problem of a cure – it just defers it. For the UK with the wide diversity of infection levels, a national approach isn’t better for hard hit areas and damages the rest without reason. Think of the anger in the hard hit areas if a national lockdown didn’t end with the lifting of their restrictions. A local graduated approach can mould itself to circumstances on the way up and the way down.

In any event, we now know that the world of lockdowns and restrictions is not going away soon, and the shifts in business are the way things will be for a while yet. This is what we, as business decision makers, must get to grips with.

In my previous blog – here – I looked at the immediate challenges, but business decision makers must begin to look beyond this, to decide where they should be taking their firms, where the opportunities are and aren’t, and how to navigate whatever might be out there in seemingly uncharted waters. There is great uncertainty, for sure, but a few things can be deduced now. There are some navigation aids. 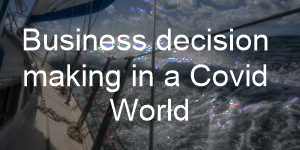 Agility and swift opportunism look like good strategic policies. Scenario planning looks like good preparation. Insight and astute interpretation look like the things that will enable policy makers to do better than just coping.