Covid climbs into the ring with the rioters

Authorities across Europe have been increasingly nervous about accelerating Covid infections. The German health minister told his public that “…Germans would be vaccinated, cured or dead by Christmas”. Populations are tired of pandemic restrictions, though, and many are taking to the streets, rioting in Holland, France, Belgium, Austria, and elsewhere (Reuters).

Not to be outdone, Covid also chose this week to show that it, too, has muscles. A new variant B.1.1.529 emerged in South Africa when scientists there saw a fast breakout with no obvious explanation. In what seems just a few days, this mutation has managed to get elsewhere, turning up in Hong Kong, Israel and Belgium, where the victim had no links or travel connections to South Africa. This variant has some potentially nasty looking mutations, and has been dubbed Omicron, perhaps no surprise that it’s far down the Greek alphabet from Delta.

I re-read the blog I wrote back in March this year – The Five Forces of Covid – and little has changed.  The Public is grumbling and so is Covid. Populations are certainly getting much more strident in their grumbling, but the virus is grumbling, too.

Covid is upping its game and has revealed that it is capable of making big changes in its quest for potency (ft.com). The uneasy balance between public willingness and pandemic realities has shifted to new grounds on both sides.

What’s worrying is that the present public unrest is being driven by responses to the past behaviour of the Delta variant. Likewise, our knowledge of vaccines is based on the past, not the present.

What’s around the corner?

Vaccines were originally designed to combat the original Wuhan strain. Remember that? Subsequent variants have been fought with the same weapons, including Delta. The further that Covid mutates from Wuhan the less effective are those Wuhan based vaccines.

While there are re-designs in the works, Coronavirus has got there first, and delivered a whopping fifty mutations, or so, beyond Delta. Worse, 32 those are changes to the virus spike that is the thing our antibodies are being trained to recognise. Darth Vader just put on a Micky Mouse mask.

Scientists will soon answer the questions about just how easily Omicron transmits between humans; how well or badly our vaccines and bodily defences will cope; and how potent the thing is if you do catch it. As I write, these things are not clear, but some other things are, and these have longer significance for the backdrop to decision making.

This virus is very capable, much more so than the majority of other pathogens that we know: 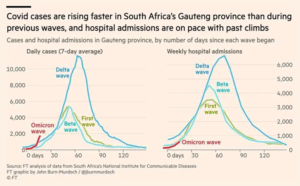 What if Omicron is really Covid-22?

It’s possible that Omicron is sufficiently different that our present vaccines and immune systems can’t recognise it adequately, making this a reset back to the beginning and giving us a virus that is really Covid-22. We will know this when the scientists and vaccine makers are able to tell us how well the Wuhan vaccines work against Omicron. Early indications from South Africa are equivocal. Transmissibility looks much higher, but hospitalisations seem to be tracking much the same as previous mutations.

Two factors make conclusions difficult to draw from these data. First, we don’t know the demographic of the cases or hospitalisations, and that must be set against the backdrop of the young population of South Africa, compared with Western nations. Secondly, we know that the vaccination rate in South Africa is much lower than many other countries. Still, we can see what looks like a much higher rate of transmissibility.

Even if Omicron turns out to be no more potent than seasonal ‘flu, widespread transmission of this kind is bad news for which we are poorly prepared. Even if all we have here is a dancing partner for seasonal ‘flu, we have lots to do before we can cope effectively.

Unfortunately, there are other possibilities that need to be considered, and these depend on the mix of Omicron’s potency and the defences we’re able to mount against it. If potency is high then we must expect significant rises in hospitalisations and so on. If the defences we have in vaccines and immunity are much lower than they are against Delta, then we have effectively got a new virus – Covid-22 – and we’re basically back at the beginning, albeit with much better knowledge about treatments. If potency is high AND defences are ineffective, then we can multiply all these things together. 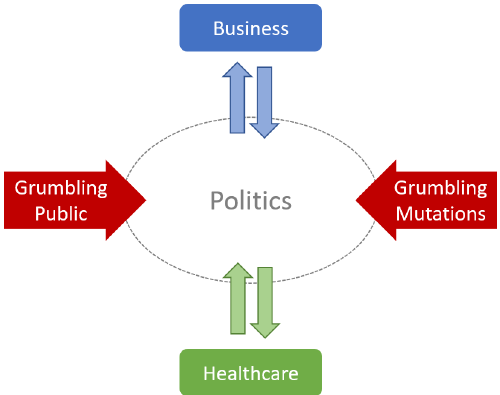 We are unlikely to know much more about all this until around a week before Christmas. It’s hard to see a plausible outcome that’s better than Omicron turning out to be much the same as Delta except more transmissible. This looks like a dream scenario at the moment, and if it comes to pass then we might just escape without much more in the way of restrictions.

The risk must be on the downside, and almost any scenario calls for things that take time to deliver. New vaccines at scale take about 100 days, so they are not going to be here until Easter, at best. What happens in the meantime is anyone’s guess right now.

Tests are yet to tell us what this virus is really like and what that means for our health. Several populations have already told us that they are tiring of the existing restrictions, and some are rioting.

Overnight a report from Israel says that two doctors who were fully vaccinated, have contracted Omicron and displayed mild symptoms, which gives us an early reference suggesting that anyone older or more at risk, or less vaccinated, may not fare as well

I sensed fear in the scientists presenting at the last two press conferences. Coronavirus has been The Great Revealer, and much will be revealed about a lot of things in the next three to six months.