Covid-19 insights: Hard hats must be worn in this area

I wrote recently about the Angry Mob of Covid Issues coming towards us in 2021, and the first straws in the wind are here. Life for decision makers is starting to get complex, as expected.

Vaccines are delivering good news and much of the data emerging as a result of extensive deployments around the world are really positive. This is the backdrop of good news that provides decision makers with a reliable tailwind. There will be some gusts in that tailwind, but the evidence is there and we can allow our confidence to grow that we will be able to control the virus if we do the right things.

The turmoil in the US Treasuries market at the end of the week highlights the growing concerns about the return of inflation. When the vast amount of stimulus and QE pumped in by central banks, all began to be a way of life in 2020, it made inflation look like the inevitable aftermath but perhaps minds were elsewhere at the time. Pause for thought about the possible implications for the servicing of the national debt and mortgages by generations who’ve only known rock bottom interest rates.

The UK Budget, next week, will start some hares running, as Sunak draws the attention of everyone to the scale of the financial chaos whose repair can only be paid for by taxpayers. That outcome is inevitable, and we now have to debate which taxpayers they will be and from what generation.

Matters related more directly to the pandemic are beginning to be more complex, too. Now that the old and vulnerable have largely been vaccinated, minds are starting to turn to who should come next and in what priority. Vaccine Envy is beginning, with different interest groups angrily staking their claims to priority. The obvious priorities have been dealt with, and now we’re left with the debatable priorities.

In much the same way, death is becoming yesterday’s pandemic issue, and the evidence is showing itself in the data. The profile of cases among younger age groups was broad based before Christmas. Unsurprisingly, there was a prominence of cases among twenty somethings in the ten days after the holidays. The profile has been changing since then.

The prominence of 25-40 year olds as a proportion of new cases has been rising since mid-January. These are the parents, staff members, and consumers in society, and it looks as though they are becoming more active as vaccines increase confidence. Regardless of the cause, they are the group that is growing among those getting ill with COVID. 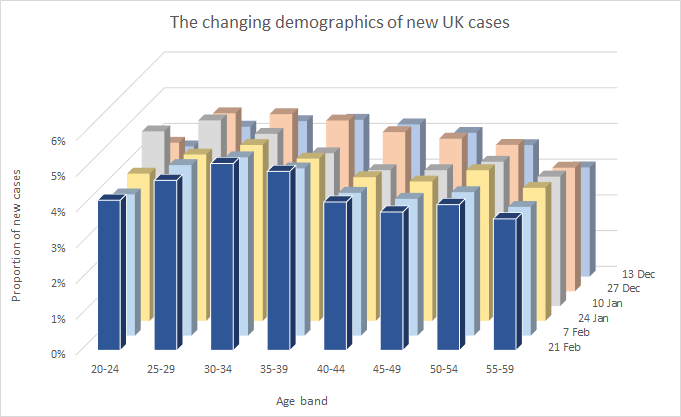 There have been reports saying that hospitalisations are much more widely spread across age groups than fatalities. Sickness is the issue that lies ahead, as the economy opens up and greater activity leads to more infection. This 25-40 age group doesn’t die as often from COVID-19, but they do get sick, with all the implications that this will bring. 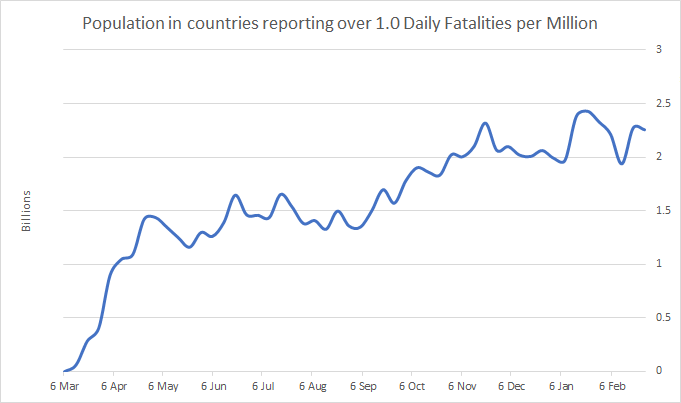 More widely across the world, the number of people living around significant Covid-19 infection rates continues to rise. Fatality rates in the Southern Hemisphere have been flat in recent days, but have displayed an upwards spike everywhere else. Localised spikes are becoming a feature, now, and are showing up in quite specific but random looking places in the UK. One plausible explanation is that these are places where mutations are showing themselves. 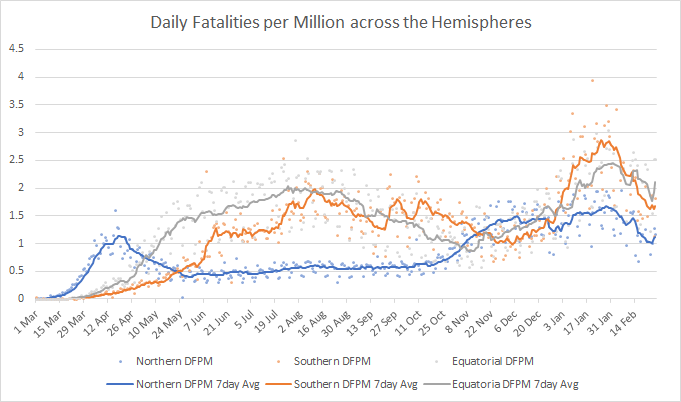 Hard hats must be worn.