Is it just me?

I don’t remember a time when so much was out of the ordinary. Is it just me or is everything more bonkers than usual? For a business decision maker it’s like driving into a blizzard. It’s hard to know what to concentrate on and what to ignore.

Fortunately, most of us aren’t directly immersed in the shenanigans of the White House or Downing Street, or the corridors in Congress, Whitehall or Brussels. So all those tweets, revelations, firings and possible defenestrations are a kind of entertainment, albeit rather black, I know. 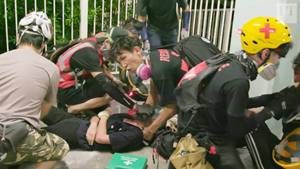 If only it was just politics: who knows where we’ll be in four weeks, and it’s not just Brexit – so much seems to be up in the air. We’ve already got trade sanctions between China and the US, and now I read that the WTO has authorised Trump to impose trade tariffs on the EU as punishment for government subsidies for Airbus, and the EU is working on sanctions for US support for Boeing.

Japan and South Korea are fighting tariffs over chemicals and semiconductors, although that is rumoured to be about resitution payments over pre-war colonial behaviour. Stock markets are sliding in response, well they would, wouldn’t they? We’re into negative interest rates in many places and forex looks like a much darker art than usual, and that’s saying something. Don’t forget Hong Kong – interesting video, this – and we’ve not even started on climate change.

Regulatory squalls are blowing a gale; data and privacy issues, too, of course. Various Silicon Valley grandees are vowing to fight possible break-up moves by Government, the new people in the EU are flexing their muscles, and some Big Tech is tussling with class actions. Short sellers are piling into WeWork bonds. On and on. Tell me it’s not just me that’s feeling this way?

What’s a driver to do in this blizzard?

Someone once said that “Management is all about solving problems before someone comes and solves them for you”. Basically: “Have you got your s**t together?” I think that drivers on ice can be divided into two: those that are broadly in control, and those who’re trying to get control back. The thing is very different for a driver if events have taken hold, and so too for the leader of a business.

There’s no doubt that all the above and other factors are punishing many businesses – think Retail, if you’re short of ideas on this, or you could listen to Farming Today on Radio4. Other troubled sectors are available. However, I know several businesses that are motoring along quite happily, seemingly with little or no impact from all this. A couple are benefitting, to be honest.

In some places it looks incredibly tough, while elsewhere it’s as though nothing is happening. Michael O’Leary says that the Brexit decision will have no impact on his business, while Four Seasons, which runs 320 care homes with 16,000 elderly residents, has just defaulted without warning on millions in rent payments due to landlords.

What was the weather forecast?

I met up with a mate today, and talked about this. He said that the writing’s been on the wall for a long time for many of the sectors that are having it tough, and he’s right. Goodness me, is he right. If you doubt this, I hope that the pages here might suggest some lines of thought otherwise.

Much of my time is spent looking outwards – it’s fascinating, for sure, but essential for almost everyone in business today. Meaningful change in the business climate and competitive environment happens really quickly, now, and it’s easy to get caught out if you’re not checking on the driving conditions for tomorrow.

Keep the initiative and identify the issues

Probably the single most important objective in business is to keep the initiative wherever you can. After all, if you haven’t got that then decisons are going to be made for you by events or by other people.

So I tend to think about business issues in four categories. I’m talking about major issues, here, that are pivotal to reaching necessary objectives.

In times of turbulence like this, it pays to have thought ahead, way ahead, and you can’t do that once you’re in the thick of it.

Know the road ahead, drive carefully and keep checking the weather forecast.

Blog Make Believe Startups
Blog Are we nearly there yet?
Blog The future began a while ago
Blog Can entrepreneurialism be taught?
Blog Human engagement is a big opportunity
Blog The Good, The Bad, and The Surreptitious
Blog We need to talk about losses