Everything’s going to be different in 2020

It was the sight of the old computer board that caught my eye and led me to watch a tv programme first aired over forty years ago. It was nostalgic to see Philip Hughes again, and those green screen word processors. It quite took me back to Logica’s Newman Street offices and gentleman farmer Hector Hart who I negotiated with several times.

I was astonished, but not by the hairstyles and clunky printers, or even the statement by an expert that any computer application would cost around £10,000. No, I was astonished by the angst about the future that ran through the whole programme about concerns were almost identical to those being discussed today, forty years and a great deal of change later. Extraordinary.

Of course, there was a lot in the programme that was definitely of its time, and plenty that has been disproved since by the way things have turned out, but the central theme was recognisable. Back then, the focus was on the microprocessor, software versus hardware, the impact of automation; its equivalent now is Artificial intelligence and dehumanisation. Uncertainty and change, the impact of technology, and debate about what to do next.

This time of year always provokes reflections, predictions and resolutions about the future. Here we are, forty years on, and still grappling with technology. We’ve moved on a long way and then some, but we still have to grapple with uncertainty and change.  The challenge is the same: what’s the right way ahead; what should we aim for this year?

That sounds like a need for leadership, and not all leaders have the same approach. They used to say that Saddam Hussain never missed an opportunity to miss an opportunity. Trump doesn’t seem to know any more about the decision than that the rest of us until he reads it on Twitter. Over here, we used to be indecisive, but now we’re not so sure. I reckon teams and ventures work best when there’s a clear objective that’s worthwhile, just achievable, and understood.

Are we striving or surviving?

It’s often easy to spot who’s got a future that inspires confidence, as this comparison shows between Microsoft, Uber and Slack. Satya Nadella was named FT Person of the year.

By the end of November, the total return generated for Microsoft shareholders during Satya Nadella’s near-six year tenure passed $1tn. Contrast that with the moment when he took over as only the third CEO in Microsoft’s history, and the software company looked like it might be on the fast track to technological irrelevance. Read the article….

However, it can take a long time to be an overnight success and, as they say in Formula One: If you want to finish first, first you’ve got to finish!  A team in difficulties should ask why it’s worth surviving: are we waiting for something to change; is it about being the last man standing; or is it because we can’t think of anything else? There has to be a purpose beyond mere survival. 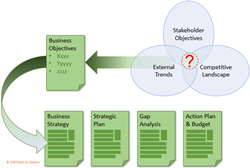 Is the top team all signed up? Has everyone else bought in? Tough debate should be behind something as important as this, whether striving or surviving, but open, shared agreement is crucial, and there are three tests:

The context – Senior decision makers often focus more naturally on internal issue and actions, than on examining their environment and understanding the implications, particularly when times are tough. Rapid and abrupt change is happening, though, and not all of it is unpredictable. This is the context within which objectives must be set.

Stakeholder aspirations – These will be very personal and specific to each situation, so inappropriate for discussion here, except to say that clarity of shared objectives and priorities is where it all begins. Without unanimity on this, what lies ahead could be difficulties in the Boardroom that are distracting and best resolved early.

Who we are and what we’ve got – these are the tools and assets that management can bring to bear to achieve the objectives. An objective might be to change, but the starting point is where you begin.

It’s all to play for, let’s get started

Although we seem to have taken forty years to get to the same place, it’s been an amazing journey. While the central concerns of yesterday are still being debated today, so much more is possible now and more easily than back then. Who knows what the concerns will be in forty years time – let’s get started with the next amazing journey!