Why The Big Short was about entrepreneurs 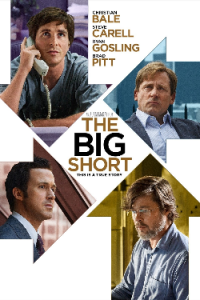 It’s 2006 and we’re at Ceasar’s Palace at the Las Vegas Securitization Conference, and the guy at the lecturn is self-congratulatory, saying: “Ladies and gentlemen, business is good, profits are strong, and the mortgage continues to be the bedrock on which this economy is built”. He gets a huge round of applause. Of course, we now know he was wrong, very wrong, but in this scene from The Big Short, our half dozen heroes are the only ones in the room who know or are willing to see. (Full credit to Paramount Pictures, by the way.)

Michael Burry, ultimately the guy at the eye of the storm, knew a year before – he knew because he’d done the research and the mathematics. He knew. He was willing to back his judgement, his insight, but not before he had been to great lengths to understand the thing in fine detail and from every angle. It seems that his fund made a gain of almost x5 – an overall profit of $2.89BN.

Mr. Burry and his investors gained because he had a unique insight that came from careful and persistent curiosity and analysis. Arguably he wasn’t foolhardy and carefree about risk, or a gambler who bets with little information, or a speculator playing the odds. He understood the real situation and risk better than those around him, saw the opportunity and was prepared to back his judgement. What better way to define the best kind of entrepreneur?

Dictionaries have all sorts of definitions but none come as close as Michael Burry, and some are simply dreadful:

There’s the worrying:
“a person who starts a business and is willing to risk loss in order to make money.”

And there’s the lifeless:
“one who organizes, manages, and assumes the risks of a business or enterprise.”

I sense that many people who’re not in business think that “being an entrepreneur” is like the first of these and about taking undue risks or being willing to do anything for the money. Not in my experience – at least, not the best entrepreneurs.

The two young investors in the movie, Charlie Geller and Jamie Shipley, are getting closer to the popular perception of entrepreneurialism that I hear. They accidentally discover a paper about what Burry is doing, and decide to go for it, too. They don’t have the right trading licence, but won’t take no for an answer, and they manage to finagle the necessary regulatory clearance by roping in a retired trader to their scheme.

Persistence and determination in the face of everything is a must for an entrepreneur because the hurdles and rocks in the road are everywhere, and you have to be able to stay the course. As they say in Formula One: “If you want to finish first, first you have to finish” and that’s whatever it takes.

Geller and Shipley had the creativity and sheer chuztpah, and Michael Burry had that same solid determination. Burry, though, is closer to my view of the best entrepreneur, and got there eventually through having the insight and curiosity to see the opportunity, care and judgement of risk where it mattered, and persistence and creativity where he had to.

What do entrepreneurs do, and why?

Undue risk taking was not what he was doing. Did he do it for the money? My guess is partly but not ultimately. I think he was more interested in proving to himself that he was right – backing his judgement and skills and succeeding, getting that thrill and deep satisfaction that comes from achieving. This is what entrepreneurship is really about, surely?

Also:
Blog Selling up is a capital idea if you’re Tarzan
Blog Elephants’ feet need not be threatening
and Interesting Reading