Selling up is a capital idea if you’re Tarzan 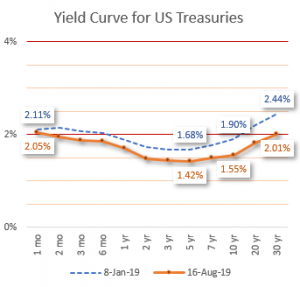 A new mortgage product was launched in Denmark last week, and it was a global first; the first mortgage with a negative interest rate. Jyske Bank, the third largest there, is offering a 10 year deal at -0.5%. They say that borrowers will still make a payment each month, as with other mortgages, but the outstanding debt will be reduced by more than they repay. In Switzerland last week, UBS told customers that they would be charged 0.6% if they deposited more than EE 500,000.  Have these people lost their marbles?

Last week saw another first in the financial markets. The yield on 30year US Treasuries dropped below 2% for the first time ever. Meanwhile, the yield curve, which has been negative for months, continues to deepen its inversion, with 10year Treasuries now below two year rates for the first time since 2007. Long term borrowing is now much less expensive than borrowing in the short term. No one wants long term cash, it seems. In Denmark, they’re effectively giving away long term cash. What’s going on?

The precise mix of causes can be debated and is hotly discussed, but two big influences are colliding, for sure. Since the crash in 2008, central banks around the world have been pushing cash into economies on an heroic scale. The US Fed has bought over $2 Trillion of securities for cash it has created at the keyboards of its back office in a process known as Quantitative Easing, or QE. The Bank of England has created almost £500bn. 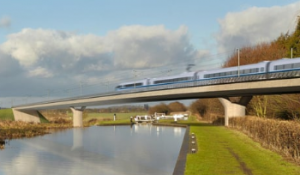 It’s hoped that this wall of money will stimulate spending and investment, and thereby stimulate economies and raise inflation, and avoid the dead hand of deflation, where everything is less expensive if you wait. Why else build HS2 if not to shove £56bn or more into the pockets of all those met with shovels and companies pouring concrete now, when it all comes back in tax eventually. Especially at these interest rates!

All that cash has suddenly piled up against ballooning fears of a world recession, sparked by the trade wars and their implications, as well as emerging implications of technology change. Germany is looking decidedly outdated as trade dries up purchasing for its engineering, and their lack of investment in innovation and things digital comes under the spotlight as the age of diesel is clearly closing, and that’s just Germany.

“….and we anticipate an exit for shareholders via trade sale in three to five years.”  How many times we’ve seen that in business plan after business plan. This has been the mantra of entrepreneurs ever since I raised my first VC round in 1980, but it now looks crazy to aim for a pile of cash when banks charge you to look after it. Low interest rates, never mind negative ones, undermine the value of that Big Payout. I remember sitting with an entrepreneur twenty years ago, calculating how many Ferrari Vouchers he would have to spend each year for what he could make by selling up – his £5m didn’t give him enough to maintain his lifestyle then, at those interest rates. There’s no chance now.

So why do it? Why work so hard to exit for cash? The answer lies in ambition. If you’re putting in all this work and sacrifice for one big dopamine rush and then retirement, you might need to think again. If you love the business of business, the love of creating, that upward staircase of achievement, then that next exit is just that: the next stair up the staircase, the next marker of achievement on the journey, and the next liberation that gives you the chance to spin the wheel again in a different way and with more cash behind you. 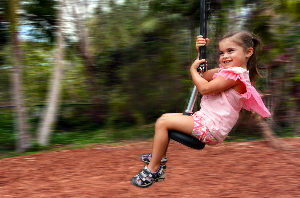 The yield you might get from the cash almost certainly won’t buy you a feet-up lifestyle, but let’s face it: as an entrepreneur you’d be bored with that, anyway. The world is full of change and opportunity, and fortune favours the brave in times like these. Business models are getting broken right, left, and centre, and there are so many possibilities for fun as well as fortune. An exit locks in what you’ve achieved, and widens your horizon for the next gig. Selling up is a capital idea if you’re energetic and innovative – no better time to swing through the business jungle and, like Tarzan, reach out for the next vine.