Elephants’ feet need not be threatening 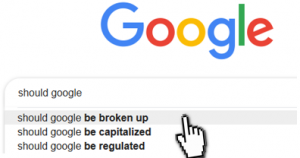 Autocomplete has its uses, it does save a bit of time, but it can be illuminating in that it gives an insight into what the most popular searches might be. Type in Should Apple – the first entry that autocomplete suggests is: Should Apples be kept in the fridge. So what, you might ask?  That’s the suggestion about Apple. Try: Should Facebook or Should Google, and autocomplete gives you quite a different suggestion. Should Google be broken up? It’s tempting to see what people might be thinking about other names….

It points to the deepening scepticism and negativity starting to form around American Big Tech. A new survey has revealed that a third of Americans view tech companies as having a negative effect on society, twice what it was four years ago. Ask that question of residents in San Francisco and you’ll get an even more robust answer. Business Insider reports that the median house price in the city is a whopping $1.3m, pumped up by the effects of the big tech firms. Office space rents out at over $81 a foot.

Their impact is huge, and they plan to keep it that way. In 2010, big tech firms were responsible for 10% of the R&D spend in the S&P 500. Today it’s 30%. Half the market capitalisation of the tech sector is concentrated in just four firms, and they’re spending hard. SoftBank is taking the same approach. They’re out raising $108bn for their new Vision Fund II and show no sign of slowing the rate that they throw the spaghetti at the wall. Scepticism abounds, of course, and founder Masayoshi Son complained recently that they’d made their current investments at valuations of $189bn but the market only valued them at half that.

A disagreement on that scale is no minor scepticism. At the very least it’s a disagreement about what constitutes value. WeWork, sorry: We Company, published its prospectus recently and the FT described it as: “29 pages of risk factors, $47bn of lease obligations, $4bn of promised revenue”. The latest SoftBank injection went in at $47bn in January – will the IPO be a down round, everyone’s wondering.

SoftBank and a few other big investors are shovelling out cash as fast as they can go, it seems, and the big tech firms are doing likewise. The impact of these vast elephants is equally vast. Ask any retailer about Amazon. That said, it looks as though Walmart is finding its feet and might give Amazon a bit of a run for it. They reported quarterly revenues up 37%, year on year, largely down to finding a model to leverage their huge estate of stores as pickup points for eCommerce.

While these behemoths seemingly operate to different rules in a different world, Spotify is small with only around $1bn in cash, while Apple has $130bn. So it’s quietly moving its business. Well, not so quietly, in fact; Bloomberg reports that it’s spent $400m on podcast related acquisitions this year. The reasoning appears to be that the lock of the big labels on back catalogues is immense, and that’s where almost all the music revenues come from, which puts Spotify in deadly combat with them and Apple. Spotify is a sales channel for a few suppliers and a huge competitor. What a brutal place to be.

There are none of the network effects of a marketplace there, to give them increasing strength the more people use their service.  Now in podcasting, there might be those network effects in a big pool of much more diverse content, and a wide diversity of listeners. The classic bow tie market with commanding strength for the guy that puts these two fragmented groups together and builds critical mass. Much more promising than slogging it out among big centres of power and getting trampled in the process.

That’s innovation for you, and that skill to think clearly and innovate holds the key for all of the rest of us who’re trying to figure out where the opportunities are in a marketplace with such huge elephants stomping around. Bin Laden didn’t try to build a military force to take on America – he innovated. Likewise Spotify.

Also:
Blog Selling up is a capital idea if you’re Tarzan
Blog Subscriptions are so middle aged
and Interesting Reading

The concentration of the big tech firms and investors is the opportunity – there are only a few of them and their characteristics are obvious. There’s more space around the feet of elephants than the area they cover. You have to be watchful and nimble, though. We’ve uncovered a new opportunity to leverage public cloud and the likes of AWS and Azure, not an attempt to compete where we’re going to get trampled. Market testing is very positive and our new service should be live soon. It’s something the elephants would never do.

Nimble, watchful innovation is the key when walking around elephants. So where are the elephants who are influencing your market, and are you actively innovating around their footprints or are you trudging on in hope?