The Good, the Bad, and the Surreptitious

What is it about humans? Protest against the introduction of new technology is hardly new. How far back do you want to go? Agricultural workers were protesting in the 1830s about the new threshing machines that were undermining their livelihood. (Wikipedia) If the subject intrigues you, then try the excellent Shield of Achilles, which examines the interplay between technology and society. 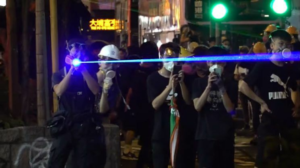 Protesters in Hong Kong are using all sorts of techniques to thwart facial recognition systems being used by the Chinese authorities, from passive face masks to the use of laser pointers as well as simply pulling down the towers used to mount the cameras. So far so to be expected, but the Hong Kong protests come as a major facial recognition firm heads to its IPO listing…… in Hong Kong, and it’s Chinese. (Forbes) See the article on thwarting facial recognition that I’ve listed here….

Ok, you could say that the people protesting in Hong Kong are not the ones likely to be investing in the flotation of Megvii, and these things are running in parallel but driven by different audiences. Perhaps.

Here in the UK there’s been plenty of strong reaction to the use of facial recognition by the developers behind the big site at Kings Cross. (BBC) This AI project seems to have been running for some time with what may be unofficial collusion with police. All this indignation and hot response from civil rights groups is probably to be expected. Yet there doesn’t seem to be the same hot response to news coming to light about FaceApp developed in Russia, and Zao developed in China, both of which have hoovered up vast databases of the faces of the willing, who downloaded these apps to amuse themselves by seeing what they’ll look like when they grow old, and inserting themselves into movies.

Is it plausible that none of the people protesting about Kings Cross have used either of these apps? Even if this is another case of opposite reactions to technology from different audiences running in parallel, how can it be that such polar opposite responses co-exist around us with so little comment?

Researchers recently revealed that Google appears to be using hidden pages to circumvent GDPR rules to send personal data to participants in their auctions. (TechSpot) It remains to be seen what the response will be to this but it’s safe to assume that plenty of people will be up in arms at the same time as they use their smart speakers. (Wrong, smart microphones, but it would be too obvious to call them that.)

Humans seem to be displaying widespread and simultaneous ambivalence, indifference and indignation. Meanwhile, the tech community goes on pushing the boundaries.

It’s not all bad or even questionable. Well, depending on your politics, I guess. Those protesters in Hong Kong have co-opted Bridgefy to communicate and coordinate action out of the grip of Chinese authorities. (SiliconRepublic) Brilliant! But wait, why do I think that this use of technology to contravene State laws is good, at the same time as being affronted by what Google and the Kings Cross developers seem to have been doing?

The good, bad, and surreptitious use of technology is all around us, while we work out what we think is right and wrong. Meanwhile, the penetration of artificial intelligence and robotics into society has hardly begun in what will be the relentless mechanisation of what humans do today. We’re going to have a lot of protests and duplicity before we’re done with this.

Also:
Blog We need to talk about losses
Blog WhatsApp scuppers the B2B market
Blog Are humans the ultimate differentiator?
and Interesting Reading

Peter is chairman of Flexiion and has a number of other business interests.
(c) 2019, Peter Osborn